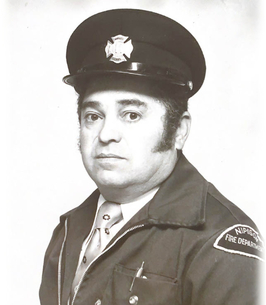 Sam was born on May 2, 1936 in Siderno, Calabria, Italy. He immigrated to Canada in 1954 and settled down in Fort William. He later moved to Nipigon in 1964 where he eventually met Carmelita Aquino and they were married on August 14, 1999. Sam worked as an Autobody Repairman, running his own shop throughout his life. He also was a volunteer Fireman in Nipigon for many years.

Sam loved gardening and a homemade glass of wine, as well as the outdoors, especially camping and fishing. His greatest passion was his family and friends, and he enjoyed having them over and cooking for them. He was an extremely hardworking, kind man, with a sharp sense of humour. Sam was well known in the community and would help anyone in need. He will be deeply missed by everyone who knew him.

Sam is survived by his wife of 23 years, Carmelita (Aquino) and his son Salvatore (Ola). He is also survived by his siblings Rosa (Giovanni) De Luca, Giuseppe (Teresa) Scarfo, Vincent (Lisa) Scarfo and Antonio (Nuzia) Scarfo as well as his sister-in-law Rosa Scarfo, brother-in-law Tony Salvador and numerous nieces, nephews, cousins and other relatives in Canada, Italy, USA and Australia.

He was predeceased by his parents, Pietro and Filomena as well as his brother Domenico and sisters Maria Salvador, Teresa (Vittorio) Topetto and Angelina Scarfo (in infancy).

Funeral services for the late Mr. Salvatore Scarfo will be held on Saturday, September 17, 2022 at 9:30am in the WESTFORT CHAPEL, 420 West Gore Street at James, officiated by Father Michael Mahoney. Private entombment will follow in Our Lady of Charity Mausoleum at St. Andrew's Catholic Cemetery. Visitation will be held on Friday evening after 6:00pm in the Chapel, with Vigil Prayers offered at 7:45pm.

Should friends so desire, donations made in memory of Sam to Diabetes Canada would be greatly appreciated.