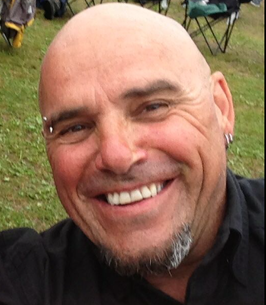 It is with great sadness that the family of Ron Deleo announces his passing on Friday, August 12th, 2022, with his children by his side.

Born and raised in the East End of Thunder Bay, the importance of family was instilled in Ron at an early age. Above all else, Ron was proud of his family and loved them with all that he had, often pulling out his phone to show pictures of his kids or grandkids and bragging about their latest accomplishments - which, in Ron’s eyes, was everything they did. Three of the most important things in Ron’s life were family, his mom’s spaghetti and meatballs, and football, which were combined on Spaghetti Sunday’s, a tradition that grew as the Deleo family did. The fifth of eight children, Ron quickly learnt how to set himself apart with his style, taste for music, and unwavering ability to stay true to himself and who he was - which included an innate ability to see and accept people for who they were. While he was Uncle Ron to many nieces and nephews, he was Uncle Ronny to many more.

Ron met many friends-turned-family during his time at Selkirk High School and then at the Mill, where he began working in 1974 and stayed for 40 years until his retirement in 2014. Ron was never one to sit still, and after retiring he worked security at different events across Thunder Bay; for Ron, doing security wasn’t about working, but about socializing with many amazing people and listening to great music. If you went out in Thunder Bay, sooner or later you would run into Ron, and you were always happy when you did. Everyone that met Ron became a friend, and to know Ron meant that you always felt loved. With a smile that could light up a room and a hug that warmed the soul, he had a larger-than-life presence that will be greatly missed. Ron was always the life of the party and would do whatever it took to make you laugh or smile, a trait he shared with the Deleos. All Ron wanted in life was to make the people he cared about happy, an impressive feat considering the hundreds of friends and family he had. Ron’s capacity to love seemed to have no bounds, extending to all animals; he loved his cat (Fred) and the dogs of many loved ones. Ron gave his love freely, and often to those who truly needed it.

Ron was a man of many talents and abilities. At an early age he showed an adeptness for sports which, combined with his innate ability to be a team player, led him to years of football, baseball, lob ball, broomball, and his favourite: slo-pitch. He also competed in a dart league and, sharing his mom’s love and skill, a bowling league as well. To those he competed with, and against, Ron was known as Flash 13, J-Bird, or Wheels. His love of playing sports, however, was incomparable to the love he had for his team: the Pittsburgh Steelers. Ron was all too familiar with the highs and lows that came with being their fan but, true to who he was, his love and dedication for the team never faltered. Once Ron loved something, he loved it for life.

While many people knew of his athletic prowess, Ron also displayed great creativity - from his often-demonstrated dance moves and air guitar riffs to drawing murals with his family. Ron had a depth and complexity that his tough exterior couldn’t relay, but that his actions did. As a lover of Harley Davidsons, Ron spent many hours riding for countless charities. Ron would give all that he had, and then some, if it meant he could help someone else.

Ron will be greatly missed by his son, Rob Deleo (Latasha) and his daughter, Chelsea Groom (Andrew). One of the greatest joys in Ron’s life was becoming a grandfather, a role he seemed born to play; the love that Ron, or “Papa”, showed his granddaughter Isabelle and grandson Ashton Groom will be a part of them for the rest of their lives. Ron will be lovingly remembered by his siblings: Vince Deleo (Judy), Darlene Winder (Mike), Teresa Deleo (Jim), Paulette Pero (Brian), Gord Deleo (Laura), Lori Gravelle (Rob), and Joey Deleo (Lesley). He will also be forever in the hearts' of his numerous nieces, nephews, and dear friends. Ron was predeceased by his parents Joseph and Agnes (née Kovac) Deleo, and many aunts and uncles.

The family would like to extend a heartfelt thank you to the nurses, doctors, and staff in the ICU at the Thunder Bay Regional Health Sciences Centre, for the dedicated care that you provided to Ron. We want to especially thank Eve for your support and guidance during this difficult time, and we are forever grateful for all that you did for us and for Ron. We also want to thank Dr. George for your kind words and attentive care.

In lieu of flowers, if friends so desire, the family asks that donations be made to the Bikers Against Child Abuse (B.A.C.A) or to the Thunder Bay Distric Humane Society. Ron loved life and he lived it to the fullest; in his memory, we ask that you do the same.
Arrangements have been entrusted to Simpler Times Cremation Centre, 575 Central Avenue, Thunder Bay.