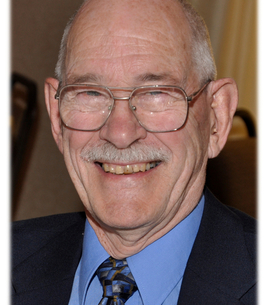 
It is with heavy hearts that we announce the sudden passing of our beloved father and grandfather Bruce Leonard Ellard, aged 92 years. He was reunited with our mother on August 5, 2022 after a short illness. He passed into the Lord’s loving embrace surrounded by family.


Dad was born May 1, 1930 in Fort William, the youngest child of William and Hilda (Bird) Ellard. He attended local schools, graduating from Fort William Vocational Institute in 1947. Dad spent time working at Chapples, Canadian Car, and the Lakehead Psychiatric Hospital before becoming the Power Plant Manager at McKellar Hospital in 1975. He retired as the Hospital Safety Officer in 1993.


Dad began his grandest adventure when he met our mother Aileen. She knew he was the one for her the very first time she saw him. When they married on July 17, 1954 it was the beginning of a 57 year love affair. Together they raised 3 children in a house he built himself in Current River. Dad and mom enjoyed many activities together before her sudden passing in 2011, including skiing, tai chi, swimming, and traveling. They visited such places as England, New Zealand, Europe, and the United States, as well as many places in Canada. Their happiest times were spent at the family camp on Warnica Lake.

Dad was a longtime member of Epiphany Lutheran Church and held numerous offices on the Church council. He also used his woodworking and metalworking skills to make many items of furniture for the Church, which are still in use today. Dad’s main focus was his family. Our mother was the love of his life and his children and grandchildren were his pride and joy. He always took an interest in what we were doing and lent a helping hand whenever he could. We will miss him greatly.


The family would like to thank the staff of the Emergency Department, 2C, and especially I.C.U. at TBRHSC, for the exceptional care they gave to our dad.


A Celebration of Bruce’s Life will be held Monday, August 15, 2022 at 2:00 PM at Christ Lutheran Church, 47 Walkover St. Live stream available through their website, christthunderbay.ca.


In lieu of flowers, the family requests donations to the charity of your choice.