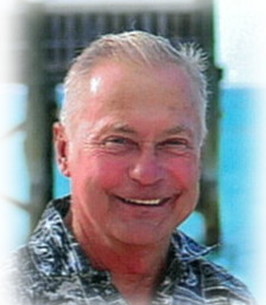 It is with heavy hearts that we announce the passing of our father, Bob Conrad, on Monday, August 8, 2022 at Southbridge Pinewood Court from complications of COVID-19 with his daughters by his side.

Bob was born to John and Stella Conrad on April 26, 1939 in Fort William the youngest of five siblings. He met Joan Zaroski and they married August 24, 1963 raising two daughters. He worked for Great Lakes Paper until his retirement.

Dad had many talents, hobbies and interests. He was a handyman, a mechanic (a real jack-of-all-trades) and an artist. In his younger years, he enjoyed hunting and fishing. Then came bowling swimming, golfing, video games, gambling, traveling, as well as his daily outings with the coffee gang.

Summers were spent at the family camp at MacKenzie Beach. Dad would spend morning ‘til night working around the camp and the evenings brought loud music (compliments of Gary), drinks, bonfires, cards, Wii bowling, dancing, singing, and laughing until the wee hours.

Dad was extremely excited to become a grandfather and passed down his handyman traits to Christian and his artistic skills to Cassidy.

Thank you to all of the staff at Pinewood Court, Manor House, Wesway, and ParaMed for your care and support over the last five years. Special thanks to Adrian Marson, John Stadnyk, and Brian Phillips for the time you spent with dad and your friendship.

Funeral services for the late Mr. Robert Conrad will be held on Tuesday August 16, 2022 with family and friends gathering in the Ukrainian Catholic Church of the Holy Cross for the Funeral Liturgy at 10:00am celebrated by Fr. Andrew Kormanik. Interment will follow in Mountainview Cemetery where Bob and Joan will be laid to rest together. In lieu of flowers, donations to the Alzheimer’s Society, Manor House, or Wesway would be appreciated.

Arrangements have been entrusted to WESTFORT CHAPEL, 420 W Gore St at James.

Think of him as living
In the hearts of those he touched
For nothing loved is ever lost
And he was loved so much.