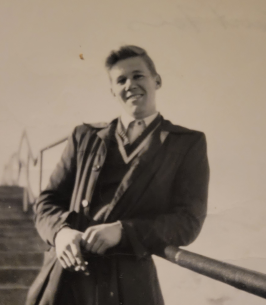 Kurt was born on September 11, 1931 in Port Arthur, Ontario. He was a hard worker, an adventurer and a family man. In his earlier years of life, he was a master of auto mechanics, leading him to become a teacher at Northwood High. Through his involvement in the educational profession he seized an opportunity to become the instructor of the first service station attendant course in Canada. This took place at the Texaco off Van Norman Street.

Kurt was also a romantic, upon meeting Louise, he fell in love and became the proud father of two sons Randall and Danny. By this time, he had built a house on Montgomery Street in Port Arthur, but his adventurous ways brought the family and his best friend John to New Zealand. He lived and worked there for 3 years before he would return to Canada to put down roots. Building a house on Melbourne Road and opening his own service station on the corner of Dawson and Dog Lake Road called 6 Mile.

As the boys grew older Kurt's love for the backwoods of Port Arthur led him to acquire large amounts of land at the end of 6th Concession (Old Hall Road). Here he would settle in but not at all settle down. He built 5 more homes, bulldozed his own road and brought in his own powerlines. The final house he built would be the closest to Hazelwood Lake. Here he would reside with his beloved wife and have his best friend John as his closest neighbour up into his early seventies.

As he and Louise grew old, the rigours of country life became a lot to take on and he moved back to Port Arthur on Clarkson Street. Married now for over 50 years, suddenly and tragically, Louise passed away from cancer in 2007. In the years to follow Kurt would slowly develop dementia leading more and more to assisted living. He stayed at the Walford, Pioneer Ridge and lastly Hogarth Riverview Manor. A special thank you to all the staff who helped in caring for Kurt over the past 10 years.

Kurt will be missed by his loving grandchildren Dylan and Rikel (and her dog Bébé); son Danny, his wife Laurie and their children Josh and Kasandra. As well as numerous nieces, nephews and other relatives.

He was predeceased by his beloved wife, Louise; his son Randy; his brother Paul and his best friend John.

A celebration of life will be held at Harbourview Funeral Centre, 499 Cumberland Street N. on Sunday September 11, from 1PM until 3PM. If friends so desire donations may be made to the Alzheimer's Society of Thunder Bay.

Arrangements have been entrusted to Everest Funeral Chapel, 299 Waverley St. at Algoma.