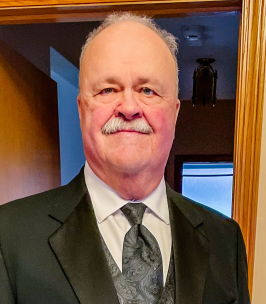 It is with heavy hearts that we announce the peaceful passing of (John) Wayne Milloy on July 20, 2022 at the TBRHSC, following a courageous battle with cancer. His positive attitude gave him strength through three years of treatments, and encouraged other friends and loved ones to fight similar battles. He was a beloved husband, father, brother-in-law, uncle and friend.

Wayne was born in St. Boniface, Manitoba on January 28, 1952 to John and Marjorie Milloy (née Sutton). He was raised in Kenora, where he made many life long friends. He graduated from Lakehead University and made Thunder Bay his home shortly after. He ended his career at CRA as Head of Special Investigations after 35 years of service.

In his retirement years, Wayne continued to pursue his love of music as a drummer in many local bands for various events. As an active member of the Royal Canadian Legion Slovak Branch #129, he volunteered to play the Last Post at Remembrance Day Services and veteran funerals throughout the city. He also joined the Masonic Lodge and was a member of Scottish Rite, where he enjoyed the challenge of holding various positions and the camaraderie of his brothers.

Summers were full of outdoor activities, including boating, fishing and camping at Thunder Bird Resort. He played baseball with the CRA league and spent over 15 years coaching and umpiring his two children. Fall and winter activities included hunting, cross-country and downhill skiing.

Wayne thrived in social settings; there was always an event to be planned, a barbeque to prepare, a fish fry to organize and elaborate family dinners to be enjoyed. He always had a story to tell, a joke to share and relationships to cherish.

Wayne leaves behind his wife Judy, daughter Kelli, son Jonathan and his fiancé, Anastasia, and his three fur babies: Tucker, Misia and Ollie.

Funeral services for the late Wayne Milloy will be held on Tuesday July 26, 2022 at 11:00 am at St. Dominic Church. Visitation for friends and family will be held at the church 1 hour prior to the service. Services will be complete following a Legion graveside service at St. Patrick Cemetery.

Should friends desire, donations may be made to the Thunder Bay Regional Health Sciences Center or a charity of your choice.