To share your memory on the wall of Mrs. Grace Stephenson, sign in using one of the following options:

Provide comfort for the family by sending flowers or planting a tree in memory of Mrs. Grace Stephenson

Provide comfort for the family by sending flowers or planting a tree in memory of Mrs. Grace Stephenson

It is with profound sadness that the family announces the peaceful passing of Gracie on Saturday February 13, 2021 at the age of 85.

It is with profound sadness that the family announces the peaceful passing of Gracie on Saturday February 13, 2021 at the age of 85.

Gracie was born on October 24, 1935 in Fort William to proud parents Ted and Grace Code. She was the oldest of 5 children. She attended Franklin Street School and Fort William Vocational School where she met her soulmate, country boy Artie Stephenson from Rosslyn Village. While in high school, she played in the orchestra, choir, competed in track and field, and was a cheerleader. In grade 12 she was selected to sing in the Massed Ontario Choir at the Eaton Auditorium in Toronto.

One night Artie took her to the Roy Ward Dickson Show at the Fort William Gardens where he proposed. On June 8, 1956, they were married at St. Paul’s Anglican Church. They settled immediately in Rosslyn Village, where they raised 4 children.

Gracie always had a great love of music, which played an important role in her life. As a teenager, she sang in the St. Paul’s Choir, and would go on to play the organ at St. Mark’s Anglican Church for many, many years. While taking a sabbatical from teaching, she returned to study piano at The Avila Centre to obtain her Grade 4 certification from Sister Immaculata. She even volunteered with the Lakehead Choral group, doing make-up for various Gilbert and Sullivan productions so she could enjoy them. Along with her love of music was her desire to dance. When she was a teenager, she would go to the CLE Auditorium every Friday to square dance. Gracie continued to dance well into her 80’s, with her favourite partner, whenever the opportunity presented itself.

Gracie had a very diverse career starting at the O’Brien Agency and moving to GMAC Financing, with pit stops in between to raise her children. Eventually she felt her calling and obtained her Grade 13, continued to Lakehead University, obtained a degree, and finally graduated from Teacher’s College in the spring of 1969. Later that same year, she started her Kindergarten teaching career at Pineview school until the brand-new Kakabeka Falls Public School opened. She remained at Kakabeka for 17 years where she made many lifelong friends including Patti, Betty, Sandy and Janis. She finished her teaching journey with brief stops at Rosslyn Village and Vickers Heights before retiring early from Edgewater School to spend more time with Artie. Gracie taught Kindergarten for 23 years and loved all of her students, often reminiscing fondly of many of them, even while she battled memory loss.

Gracie and Artie loved to travel, frequently packing the kids in the Brown Plymouth Wagon for summer trips across Canada and the US, including numerous visits to Auntie Jean’s farm, with highlights of attending Expo 67 and the 1976 Olympics in Montreal as well as the Centennial celebration in Ottawa. We often ended the summer at the Minnesota State Fair with the Goodmans before the whole family had to venture back to school in September. Some of her favourite adventures were her trip to Florida and the east coast of the US with her pal, Patti Farmer (the lame leading the blind), her tour around Ireland, where she was very excited to see the County of Carlow where her ancestors were from, and many bus trips to Nashville and Branson to see her heartthrob, Daniel O’Donnell. She also made many trips while her kids lived abroad, travelling to Los Angeles to see Brad and family while he attended USC and Janet and family in Whitehorse and Portage La Prairie.

Family was always very important and close to her heart. She was so very supportive of all her children, often making sacrifices to ensure the happiness and success of her family. Gracie and Artie were fortunate to have 10 grandchildren and 8 great grandchildren, who they treasured deeply. She relished the time she was able to spend with them, often getting excited at their impending arrival.

We would like to thank Doctors Stamler, Agostino, Skunta and Johnson for the tremendous care they provided for Gracie over the last few difficult years. We also want to express our appreciation for the wonderful personnel at Hogarth Riverview Manor especially the caring staff in Transition-Cedar Wing and 7 South for their exceptional care while Gracie lived there.

As expressions of love, donations can be made in Gracie’s memory to the following charities: St. Mark’s Anglican Church, Rosslyn; the Khartum Patient Transportation Fund, c/o The Lakehead Shrine Club; Grace Place Ministries on Simpson Street, or a charity of your choosing. We are sure Gracie would be pleased with whatever choice you’ve made.

As per her wishes, cremation has taken place and a small family service will take place at a later date due to COVID restrictions. Arrangements have been entrusted to the Westfort Chapel, 420 West Gore Street at James.

We encourage you to share your most beloved memories of Mrs. Grace here, so that the family and other loved ones can always see it. You can upload cherished photographs, or share your favorite stories, and can even comment on those shared by others.

Posted Feb 25, 2021 at 12:33am
Dear Artie & family. My deepest condolences on the passing of Gracie. I remember Gracie as my kindergarten teacher and her kindness and smile whenever I saw her over the years. My thoughts are with you all. Take care.
Michelle (Jobbitt) Cross
Comment Share
Share via:
RT

Posted Feb 23, 2021 at 05:56pm
Artie and family. So sorry to hear of Graces passing. Out thoughts are with you.
Rob and Brenda Thompson.

Posted Feb 21, 2021 at 05:07pm
Dear Artie and family
It is with great sadness to hear that Gracie has passed. I know the past few years have been difficult as you all dealt with her diagnosis. When someone has Alzheimer's, you feel like you are losing a bit of them everyday, yet when they finally pass, the loss is so profound. Grace was so many good things, but my memory of her will be as a kind friend and wonderful neighbour. Oh how she will be missed! God bless you all and grant you peace in the difficult days ahead.
Big hugs from Denise and her family
Comment Share
Share via:
SJ

Posted Feb 21, 2021 at 11:32am
Dear Artie and Family.
Our deepest condolences to you and your family on the passing of Gracie. She will be missed by all. May she rest in peace. Sincerely Sandra and Elving josephson
Comment Share
Share via:
JM

Posted Feb 21, 2021 at 11:29am
I was sad to read that Grace had passed away, Art. it has been many years since we have been in touch. We are still living in Penticton, B.C.
I remember the day we visited you in Fort William and your first child had just arrived. Such a happy memory for us.
Do get in touch with us our email in charlieandjean@yahoo.com
Comment Share
Share via: 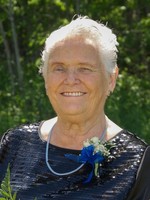