To share your memory on the wall of Mrs. Alli Rantala, sign in using one of the following options:

Provide comfort for the family by sending flowers or planting a tree in memory of Mrs. Alli Rantala

Provide comfort for the family by sending flowers or planting a tree in memory of Mrs. Alli Rantala

Print
Alli Rantala went peacefully home to be with her Lord Jesus Christ on Sunday, February 14, 2021.

Alli was born in Vimpeli, Finland on April 23, 1929. She moved to Timmins, Ontario, Canada in 1951 where her Seta, Jaakko Pohjoispaa was wo... Read More
Alli Rantala went peacefully home to be with her Lord Jesus Christ on Sunday, February 14, 2021.

Alli was born in Vimpeli, Finland on April 23, 1929. She moved to Timmins, Ontario, Canada in 1951 where her Seta, Jaakko Pohjoispaa was working. She met her lifelong friends Ilona and Viola, while working in a bush camp as a cooks helper.

In 1955, Alli moved to Port Arthur, Ontario, where she worked at the Prince Arthur Hotel. She met her husband, Walter while living on Ontario Street. They married on December 29, 1956 and raised their family first on Shipley Street and then in the home Walter built on Robinson Drive.

Alli loved caring for her home and four children by preparing many traditional Finnish foods. Her children and guests enjoyed mojakka, pulla, graham bread and rice pudding as well as many others. Her only failure as a cook was the occasional meal of Canadian fish sticks. (She herself hated fish) which she always overcooked. She supplied her family with warm knitted tossu and sukka well into her eighties.

Alli enjoyed singing in the Oras Ladies Choir and Bethel Lutheran Church Choir for many years.

As a youth in Finland, Alli was an avid cross country skier and won a second place award. She was a passionate sports fan, especially Finnish Hockey and Vimpeli Vetos Baseball, who she proudly got to see win in 2010, 2016 and 2017. She was so very proud of Paavo Nurmi, “The Flying Finn”, who she would tear up over and other Finnish Olympians' accomplishments.

We all knew her “bear stories” that she loved to tell, from the bush camp and Robinson Drive by heart, yet enjoyed her telling them one more time.

Later at 52 years old when Alli's husband, Walter went to be with the Lord, she worked as a cleaner first at the Munro Motel and then at Confederation College until her retirement.

Alli will lovingly be remembered by her three sons, Erick (Sharon), Terry (Patti) and Randy (Lori); and her daughter, Patsy Rantala (John Costa). She will be missed by her grandchildren, Ryan Costa, Alyssa Rantala, Jai Rantala, Barry Arklie (of Winnipeg), Stu Grobelny (Christina and daughters Lily and Gabriella), Leah Rantala (of St. Catharines) and Jared Rantala (of Guelph). Also loved by her little sister Aila and her husband, John Poystila and their children; as well as many other nieces and nephews, both in Finland and Canada.

Alli was predeceased by her husband Walter E. Rantala; her parents and numerous brothers and sisters, both in Finland and in Canada.

Funeral services will be held privately at EVEREST FUNERAL CHAPEL, 299 Waverley Street at Algoma, on February 19, 2021 with the Reverend Jari Lahtinen officiating. Interment in Riverside Cemetery. Funeral services can be viewed on the Everest website beginning Saturday, February 20, 2021.

In lieu of flowers, donations to the Lutheran Community Care Centre would be appreciated.

Jesus said unto her,
“I am the resurrection, and the life. He that Believeth in me, though he were dead yet shall he live”
John 11:25

As directed by the Province of Ontario and the Bereavement Authority of Ontario, the attendance at the funeral is restricted to 30% capacity or less and a record of attendance must be maintained. Wearing of masks or face coverings by everyone and maintaining social distancing of 6 feet is mandatory for those attending the services.
Read Less

We encourage you to share your most beloved memories of Mrs. Alli here, so that the family and other loved ones can always see it. You can upload cherished photographs, or share your favorite stories, and can even comment on those shared by others.

3 trees were planted in the memory of Mrs. Alli Rantala

Posted Feb 20, 2021 at 02:09pm
So sad to hear of Alli's passing. Our deepest condolences. I fondly remember visiting at Aunt Alli and Uncle Walter's homes on Shipley St. and Robinson Dr., as a child. Raymond remembers meeting her thru Patsy and John at Robinson Dr., when he was in his early twenties. We will always remember her warm, welcoming, and generous spirit.
Comment Share
Share via:
R

Hopefully at good translation to this lovely note from a dear cousin: I'll remember you, Aunt Alli, always so beautiful. You had golden curls, laughing eyes, and white pearls around your neck.My mother told me a lot about you and how you always looked after and nurtured your younger siblings.I received dozens of letters and Christmas cards from you, which at the end always said Alli with my love and blessings.A picture of an angel had appeared on my mother's grave on the same day you slept away.Sure, it had come to it with the wings of a great bird, but it brought me comfort that you are now with my mother.She never stopped missing you, her beloved big sister. Blessed trip to life, Aunt Alli, who is dear to you.From the windows of the starry sky to your loved ones, you will watch their every step from there to bless and protect .You are at the bridge of fond memories with prayers You are light, happy, everything every day and night.
R

My warm thanks to you, Sharon, for translating my loving memories. Every beautiful memory of Aunt Alli blooms deep in my heart. My deepest condolences. John 11:25–26 Jeesus said to her: “I am the resurrection and the life. Whoever believes in me, though he die, yet shall he live, and everyone who lives and believes in me shall never die."
JH

Posted Feb 18, 2021 at 04:58pm
Alli was an amazing woman I met her years ago when my son and Patty had a son, Ryan, together. She was very protective of her new grandson as I came to appreciate when they lived with her. I loved that she was overprotective of our grandson but she loved to see me when I came to visit. We would have tea together and talk about our children. I loved that and the memories. Later we would share Christmas Eve's together with her family at my son's home. I loved every visit with her She was so kind and loving with her family which included my son John . Love and miss you Allie ❤❤ 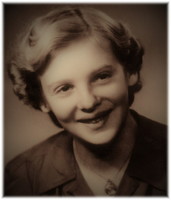